Today I am releasing Surviving Titan 0.7.0 which is the largest post-launch update to date! This update includes a new boss, several key changes to the farming system, a new building, an early version of the rail system, several new items, hotbar rebinding and gamepad improvements!

By popular request hotbar keys can now be rebound from the standard 1-9 to whatever you want, just toggle the option in the settings screen – 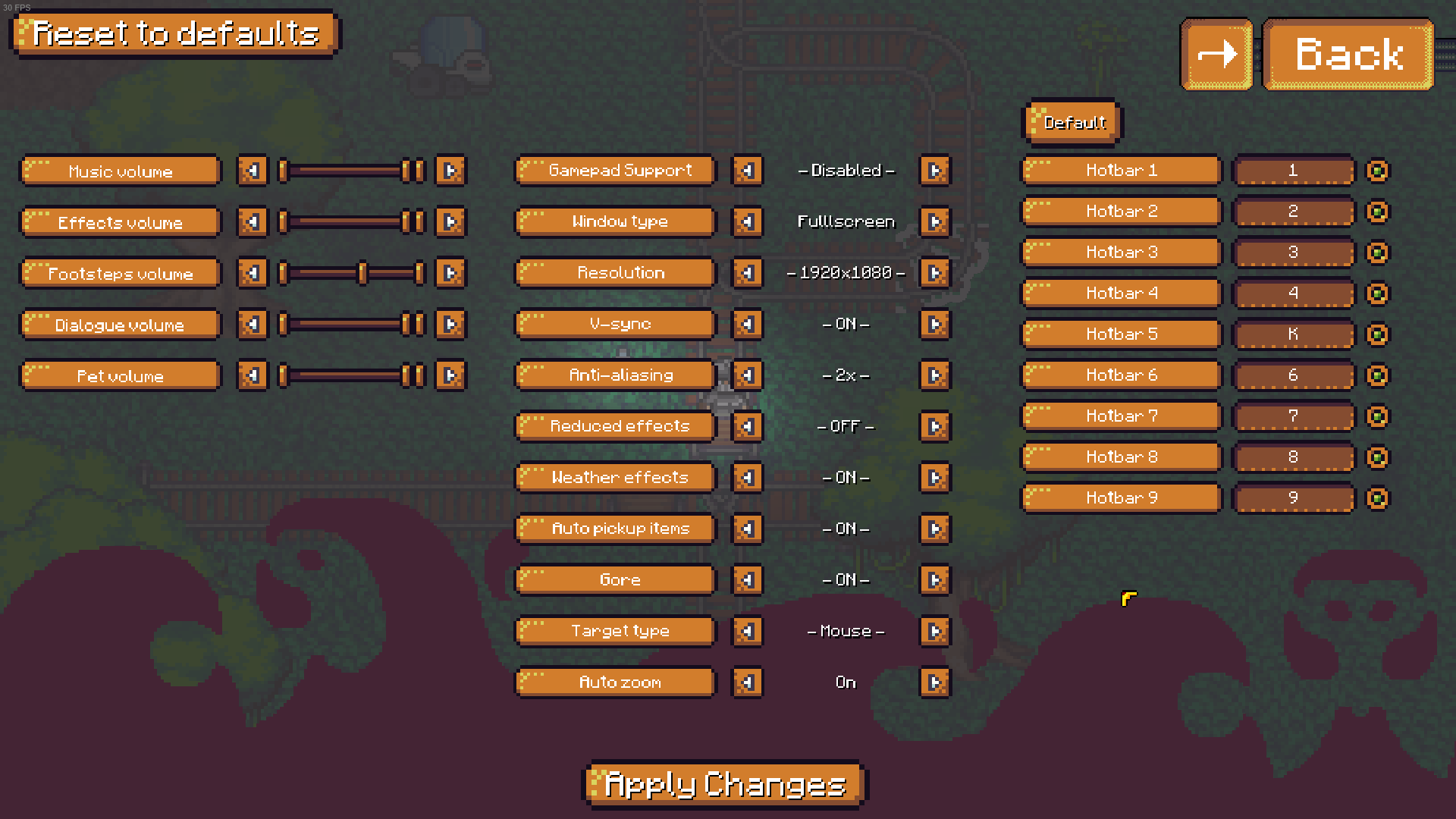 There are several new items revolving around farming in this update, this includes the compost bin, compost, fertilizer and ultrasonic device.

The compost bin (craftable at the workbench) will take any organic materials you put into it and turn it into compost. This is a slow process so multiple bins are ideal.

The ultrasonic device (craftable at the synthesizer) will scare scavengers away from your crops at a much farther range than the scarecrow!

Crops will now display several new variables when hovering over or examining them, this includes their health, water and dirt quality. If a plant does not have any water it will begin to lose health over time. If a plant has both water and good dirt quality it will regain health and grow much faster!

There is a very early version of the rail system included in this update, it is a bit buggy and not feature complete but I plan to build on it in future updates. For now, you can just build a track and ride it but in the future, I plan for there to be more functional carts – 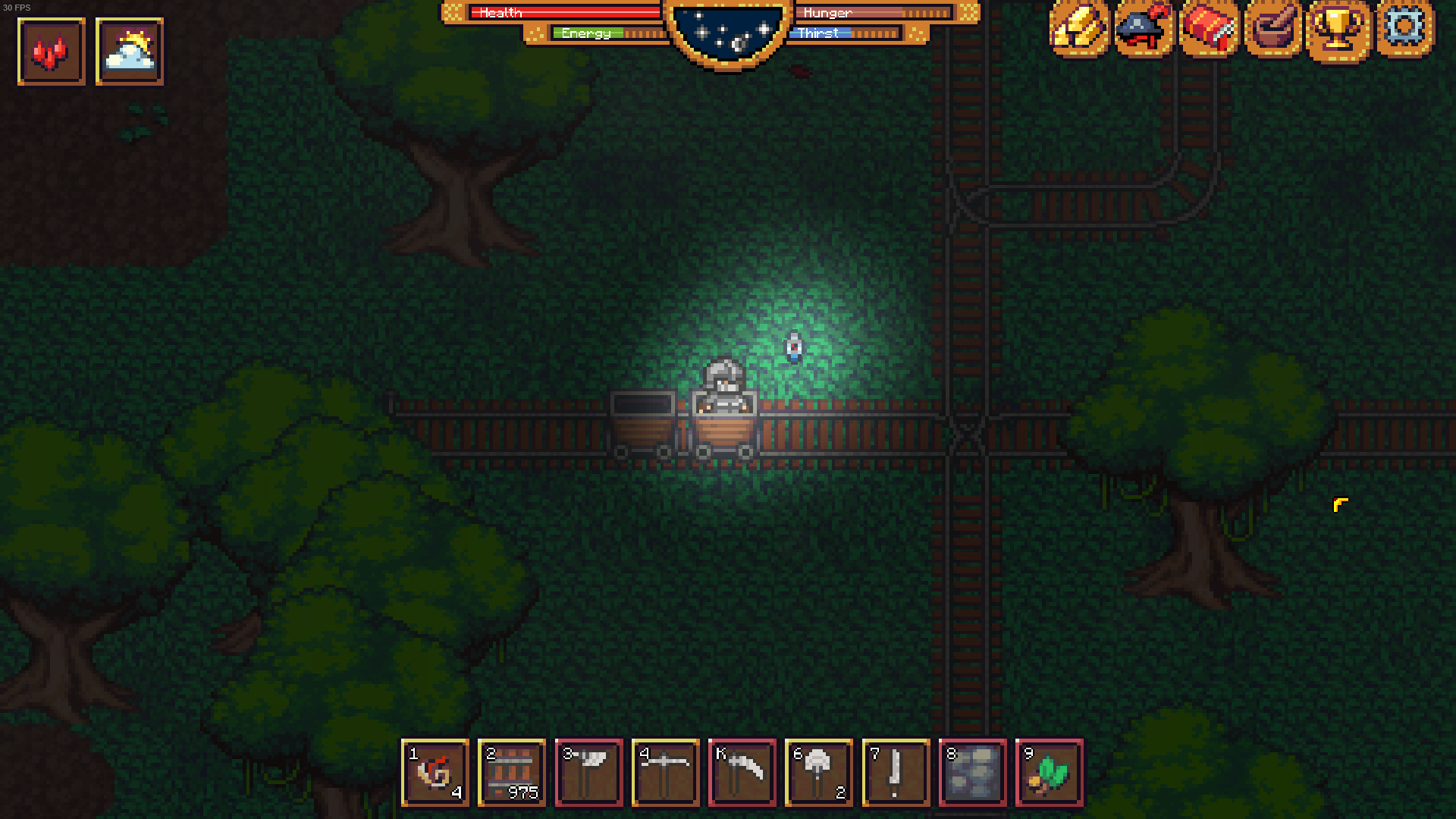 You can now craft a windmill at the carpenters table! The windmill is used to turn wheat into flour. It is a large structure so be sure to give it lot’s of space when placing!

A new NPC has found its way to the firelands with some interesting, albeit dangerous abilities. Be sure to pay them a visit if you fancy a real challenge!

Here is the full patch notes –

• Added a new building to craft – the windmill
• Added new compost bin object
• Added new ultrasonic device object
• Added new item, master gem
• Added compost and fertilizer items
• Added new quest
• Added new boss fight
• Added new lettuce plant you can grow!
• Added new mine cart
• Added new rails system
• Added a new achievement – Good times
• Added new cooking recipe – honey sweet
• Added two new salads to create, tomato and crab
• Fixed rune sprites not matching
• Fixed bug with combat, dummy achievement not unlocking
• Moved gamepad to top of settings screen
• Fixed bug with the saviour achievement not always unlocking correctly
• Added sounds to cellar unlock
• Added new achievement, The ancient one
• Refilling from a well/rain catcher will now attempt to refill as much as possible, not in increments
• Wells now work on a global timer (You do not need to be near them for them to refill)
• Increase well water capacity to 1000ml
• Increased rain catcher water capacity from 50 to 100
• Watering cans now have to be refilled, increased water capacity from 100ml to 250ml
• Added the ability to rebind hot bar keys in the game settings
• Fixed weapons not drawing correctly after being resurrected by SHARD
• Fixed a small memory leak
• Items can now be quick-added to the hotbar while using a gamepad with (Y)

That is all for today guys.

I hope you are enjoying the game and looking foward to adding more content!

Hello adventurers! I am extremely happy to be moving version 0.1.4 from…

Surviving Titan 1.0.0 is now live! This is the biggest update to…